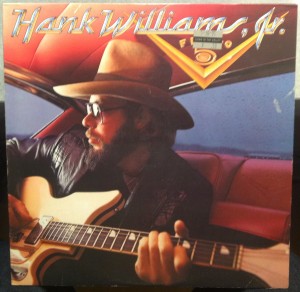 1) When you’re raised up around country music and then cut your teeth in indie-rock you get a lot of disinformation. One thing you hear from people is, ”There’s only one Hank … and that’s Hank senior.” I bought it for years. Popular opinion, and I mean across the board, will tell you that of all the Hank Williamses across the multiverse, Hank The First is the only Hank worth your time.

That being said, a couple years ago I stumbled onto some Hank Williams Jr. records from the ’70s in the five dollar bin and my preconceptions were blasted all over the wall.

I still love me some Hank Williams Prime but try and tell me “OD’d In Denver” isn’t one of thee finest bad-ass outlaw songs ever written. Is he hip? Far from it. Are the songs good? Find the 1979 studio version of “OD’d in Denver” and decide for yourself.

After that work your way through “Whiskey Bent And Hell Bound,” then “Family Tradition,” “The Pressure is On,” ”A Countryboy Can Survive” (my personal favorite), “Old Nashville Cowboy,” the big league strut of “The Conversation” (with Waylon Jennings), “All My Rowdy Friends Have Settled Down” (second favorite), etc. Sure Hank Jr.’s done some awful things but, haven’t we all?

2) One of the least awful things you can be is a fan of something. Something you can love but not own. Something to give your heart to and not have it broken.

3) If the universe really is infinite like the multiverse theorists believe, then there is only a limited amount of ways matter can come together to make form. Which means across the (literally) endless spectrum of constituent universes, there are countless Earths and countless yous, most of varying composition but some—MANY, because infinite space is a big thing—that are totally identical, that exist in the same physical form as you and on the same quantum table; a you that is reading this right now off that same phone, a billion yous drifting across the high dimensional planes reading the words “high dimensional planes.”

What if there was another you in a parallel universe that had slightly different tastes, beliefs, and basic aesthetic inclinations? Say, a you that likes Hank Jr. juxtaposed against the Hank-Sr.-loving you here in the observable universe—an opposite you, but a you that is more or less synchronous. What would you say to the alternate you? What if there was another you that hasn’t made the same mistakes? If not, are you truly alone because there is only you?

4) Is parallel universe theory a form of immortality? A you always out there, always alive no matter what happens to the you of right-here-right-now. A you existing infinitely. Could that be an explanation of “god”?

The idea of “fictional realism” posits that because fictions exist, because a thing/character/person exists in fiction, it will exist somewhere in physical form across the multiverse, i.e., all things imagined will be real somewhere because of the limited variation of matter. That includes Nick Carraway, Scout Finch, Harriet the Spy, Batman, Temple Drake, Mabel Longhetti, Harold Chasen, Jake Barnes, Augie March, Augustus McCrae, Anna Karenina, you name it—as long as they obey the fundamental laws of physics they would (hypothetically) exist; the idea being something like, “Everything that can … will.”

5) What makes you you and not someone else? Petty shit like musical taste? Sexual proclivities? Eye color? Where’s the defining line? Can you see it? Could you touch it if it was there in front of you?

6) What is it that makes you feel less alone with yourself?