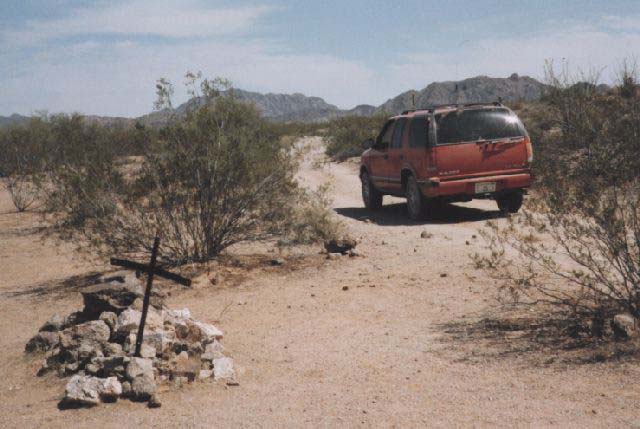 Excerpts from The Devil’s Highway by Luis Alberto Urrea

“In May 2001, a group of men attempted to cross the border into the desert of southern Arizona, through the deadliest region of the continent, a place called the Devil’s Highway.  Fathers and sons, brothers and strangers, entered a desert so harsh and desolate that even the Border Patrol is afraid to travel through it.

For hundreds of years, men have tried to conquer this land, and for hundreds of years the desert has stolen their souls and swallowed their blood. Along the Devil’s Highway, days are so hot that dead bodies naturally mummify almost immediately.  And that May, 26 men went in.

Twelve came back out.

Experts can’t give a definitive schedule of doom. Your own death is largely dictated by factors outside of your control, and beyond accurate prediction. Your own fitness is a factor, your genetics. Gender doesn’t seem to affect your chances much. Women are far from being the “weaker” sex.  They survive as long as men, and often survive longer. Hydration before the event might buy you time, same with shade, a hat, rest.  How much, however, remains unknown. All sources say you will die in a period of time that can vary from hours to days.

However long it takes you to die, you will pass through six known stages of heat death, or hyperthermia, and they are they same for everyone. It doesn’t matter what language you speak, or what color your skin. Whether you speed through these stages, or linger at each, hyperthermia will express itself in six ways:  Heat Stress, Heat Fatigue, Heat Syncope, Heat Cramps, Heat Exhaustion, and Heat Stroke.

The people most at risk from hyperthermia are the elderly. That’s why Midwestern heat waves feature dead Chicago retirees by the score.  But the wicked genius of Desolation is that it makes even the young old so that it can kill them more easily.

“What kills the people,” says Consul Flores Vizcarra, “isn’t the desert, or the Coyotes, or even the Border Patrol.  It is the politics of stupidity that rules both sides of the border.”  The supposed lifesaving tactics of the Border Patrol are “like throwing a child in the ocean and then throwing in floaties afterward. It’s not sufficient, and we think it’s disingenuous to say they’re making it safer. Our border policies are the direct cause of the deaths.”  Numbers never lie, after all: they simply tell different stories depending on the math of the tellers.

The Center for Immigration Studies puts the estimated lifetime cost of each illegal is around $55, 200.  That is, welfare, medical, school, various outreaches, cost us $55K+ over a lifetime of menial labor.  The Mexican Migration Project points out that harsher border policies ensure that illegal immigrants stay for longer periods – thus ensuring some percentage of that $55K prophecy comes to fruition.

Several studies have also shown that illegal immigrants actually depress wages. They help keep the minimum wage down. This means savings for the Captains of Industry:  low wages and a cheaper product. Vicks VapoRub is bottled in Mexico; Big Macs cooked by Mexicans. Shaving points off both ends.

If there are eight million illegals slaving away in the US right now, most of those workers pay federal income tax: shaved right off the top. No choice, just like you. They pay state taxes: shaved right off the top.  They get tapped for Social Security and FICA. There’s a whole lot of shaving going on.  If you multiply $4.50 an hour by eight million workers, that would mean there are $36 million taxable dollars being accrued every hour by illegals getting tapped for some percentage by Uncle Sam.  Those workers will not receive a refund. State tax? Has the governor of California gotten a new swimming pool lately? How’s the governor’s mansion in Baton Rouge looking?

Lower wages, cheaper product, unclaimed federal & state taxes, unused Social Security.  Over a lifetime, does it start to ameliorate that $55K? What about sales tax, gas tax, rent? What about Pampers at the local Vons?  Cigarette tax. Beer. Tortillas and BVDs and cable and used cars and speeding tickets and water bills and electric bills and tampons and Trojans and Mars bars. Movie tickets. Running shoes. CDs. Over a lifetime, how much does it add to the American commonwealth?

But they take away our jobs!  Interestingly, the US Bureau of Labor Services has reported that by 2008, there will be five million more jobs in the US than people to do them. THis is after the tides of illegals. After the post-Iraq economic doldrums. Even if we vacuum up the homeless and set them to sweeping and frying, we’ll have a few million vacancies.  Who you gonna call?

UCLA’s North American Integration and Development Center released a 21st century study that found that “undocumented immigrants” contributed “at least $300 billion per year to the US gross domestic product (GDP).”Although conservative groups claim that illegals are a social burden, they tend to shy away from seeking social services because they don’t want to be deported.  Wherefore $55K?

According to the American Graduate School of International Management, Arizona alone gets “$8 billion in economic profit annually from the ‘relationship’ with Mexico.”  That’s profit, not costs. Mexico makes $5.5 billion.  The US makes more money in the deal than those wily Mexicans.   From the same study:  “Mexican immigrants paid nearly $600 million in federal taxes and sales taxes in 2002…. Mexican immigrants use about $250 million in social services such as Medicaid and food stamps…. Another $31 million in uncompensated health care….”

That leaves a profit of $319 MILLION.

– The total buying power of Arizona’s Mexican immigrants is estimated at $4.18 billion.

– Mexican tourists and visitors spent $962 million in Arizona in 2001, while state residents spent about $328 million in Mexico.

– Remittances from the state’s Mexican immigrants to their homeland reached $486 million last year, with those transactions generating about $57 million in fees to Arizona banks and financial institutions.

Crunch. Slide. Gasping: that was the sound. Gasping and sobbing and coughing and heartbeats. Canta y no llores!  The ragged breathing of those walking beside them made the men cringe. Stop to piss: piss in cupped hands, lick every hot smear of it from your fingers. If they weren’t trying to save themselves, they would piss in each others’ mouths.  Sacrament. Communion. Oh God, in Thy dwelling place, hear our pleas. Hearts drumming, soft hammers inside them, dull fuzzy banging, faster and faster. Blessed Mary, Mother of God, pray for us sinners now and in the hour of our death, amen.  El tuca-tuca-tucanazo!  WINGS ABOVE THEM. BLUE MEN. WHITE TEETH. NOTHING. EMPTY NOTHING EMPTY BONES EMPTY HEAT NOTHING BUT SUN EMPTY NOTHING.