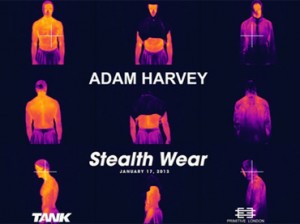 Some fashonistas strive for sexy when it comes to clothes, but one artist from New York is taking a rather utilitarian approach with outfits — he’s about to unveil a whole line of garments designed to make the wearer nearly invisible to drones.
Brooklyn-based artist Adam Harvey used to work primarily with photography, but he undertakes an entirely different medium with his newest project. He says that in the years since the United States post-9/11 PATRIOT Act has been in place, cameras have stopped becoming “art making tools” and have instead become “enablers of surveillance societies.”
That was Harvey’s explanation last year when he discussed his projects with the website Rhizome. At the time, Harvey was experimenting with how household make-up could render it harder for computers to use facial recognition programs to pluck people out of crowds. And while the practice of examining facial features using biometrics and sophisticated surveillance cameras has certainly intensified in the months since, Harvey has found another type of evasive practice that is a bit harder to avoid: the drone.
The United States currently has a modest arsenal of unmanned aerial vehicles — UAVS, or drones – that it uses in surveillance missions on its border with Mexico and in war zones overseas. By the year 2020, however, the Federal Aviation Administration expects the number of domestic drones in American airspace to be as large as 30,000.
At the moment, law enforcement agencies across the country are trying to get their hands on their own surveillance drones, some of which “can zoom in and read a milk carton from 60,000 feet,” according to the Electronic Frontier Foundation. And while escaping a space-age robotic spy machine thousands of feet above the Earth might not be as easy as, say, putting on some blush or mascara to make it harder to be detected, Harvey has designed an entire clothing line that will help disguise people from the all-seeing eye of Big Brother.
On January 17, Harvey will unveil Stealth Wear at a studio in London. There he’ll debut his “new counter surveillance fashions” that he plans to also test before his private audience.
“Building off previous work with CV Dazzle, camouflage from face detection, Privacy Mode continues to explore the aesthetics of privacy and the potential for fashion to challenge authoritarian surveillance,” the press release reads.
In collaboration with NYC fashion designer Johanna Bloomfield, Harvey has tried to tackle “some of the most pressing and sophisticated forms of surveillance today.”
Ultimately, it’s a fashion statement that says an earful to those enabling a growing spy state.
“I think building privacy into modern garments can make them feel more comfortable and, like armor, more protected,” Harvey told Rhizome last year. “Data and privacy are increasingly valuable personal assets and it doesn’t make sense to not protect them. It’s also a great conversation starter.”
Harvey hopes to get those conversations starting next week in London, where he will unveil an anti-drone hoodie and matching scarf, a shirt that shields the wearer from X-rays and a pocket protector that he says blocks cell phones from sending and receiving signals.
For the hoodie and scarf set, Harvey and Bloomfield use materials designed to thwart thermal imaging, which the artist says most UAVs employ in order to zero-in on targets. The t-shirt allegedly protects a person’s internal organs from harmful X-rays and the “Off Pocket” pants accessory disconnects mobile devices from service providers with special materials.
“Smartphones infiltrate our senses. They cause anxiety, phantom vibrations, and keep us on alert,” he told Rhizome. “We expend energy maintaining an always-on connection. Smartphones should come with a switch to turn this off, but they don’t. Turning my iPhone off and back on takes 45 seconds. Using flight mode is also clumsy. I wanted a way to quickly and politely disconnect myself without relying on the phone’s software or hardware features. The Off Pocket circumvents this design flaw.”
“[W]hen I first modified my pants with signal attenuating fabric, it felt odd to be unplugged. It was as if I had blocked out part of the world, covered my ears, or closed my eyes. But then I adjusted and realized that I had just opened them again.”
The artist says accompanying each project will be either recorded and in-person demonstrations that reveal the process behind each specific technology and counter technology relevant to his work.
Speaking to the UK’s Register back in 2010, Harvey said even then that surveillance was becoming more prevalent.
“The number of sensors that are going into the public spaces has been increasing,” he said, adding that we very well might be “heading to the point where we as a society need to think about what we are comfortable with.”
“Maybe you could go to a privacy hair stylist in the future,” he quipped.