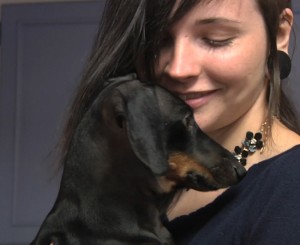 Today Leah Plante will again appear before a federal grand jury in Seattle, Washington, for the third time, and refuse to testify about her political beliefs and political associations. It is likely that she will be imprisoned for her principled stance against what she calls a witch hunt against local anarchists.

The grand jury is investigating anarchists in the Northwest, following FBI and Joint Terrorism Task Force raids in search of “anarchist literature.” Two other anarchists, Matthew Kyle Duran and Katherine Olejnik,have already been imprisoned for refusing to cooperate.

Plante wrote a powerful statement to her friends and supporters in preparation for today’s hearing. Here is an excerpt:

On the morning of July 25th, 2012, my life was turned upside down in a matter of hours. FBI agents from around Washington and Oregon and Joint Terrorism Task Force agents from Washington busted down the front door of my house with a battering ram, handcuffed my house mates and me at gunpoint, and held us hostage in our backyard while they read us a search warrant and ransacked our home. They said it was in connection to May Day vandalism that occurred in Seattle, Washington earlier this year.

However, we suspected that this was not really about broken windows. As if they had taken pointers from Orwell’s 1984, they took books, artwork and other various literature as “evidence” as well as many other personal belongings even though they seemed to know that nobody there was even in Seattle on May Day. While we know that knowledge is powerful, we suspected that nobody used rolled up copies of the Stumptown Wobbly to commit property damage. We saw this for what it was. They are trying to investigate anarchists and persecute them for their beliefs. This is a fishing expedition. This is a witch hunt. Since then, thanks to a Freedom of Information Act request, we have learned that this Grand jury was convened on March 2nd, 2012, two months before the May Day vandalism even took place… 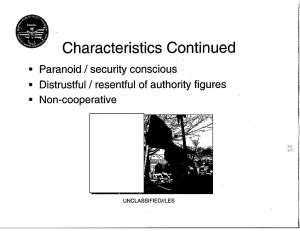 This is from a FBI training guide about anarchist “terrorists.” “Non-cooperative” is one of the only things they got right.

I do not look forward to what inevitably awaits me today, but I accept it. I ask that people continue to support us throughout this process by writing us letters, sending us books, donating and spreading awareness.I cannot express in words how grateful I am to all those who have shown us support and solidarity, especially our friends, partners and loved ones. We will all get through this together. I know I am a broken record with the following sentiment, but I feel like it’s worth repeating. They want us to feel isolated, alone and scared. I know that even though Kteeo has been held in what is essentially solitary confinement, she does not feel alone. I know that Matt does not feel alone. I know that I will not feel alone. When they try to mercilessly gut communities, we do not scatter, we grow stronger, we thrive. I view this State repression like this: The State thinks it is a black hole that can destroy whatever it wants. In reality, it is much more like a stellar nursery, wherein it unintentionally creates new, strong anarchist stars.

My convictions are unwavering and will not be shaken by their harassment. Today is October 10th, 2012 and I am ready to go to prison.